We have been hard at work, making our Migration Center even more awesome, by extending its functionality even further!

Previously, our Migration Center was able to pull accounts from any individual cPanel account, or even a full WHM / Reseller account with any other cPanel provider, which on its own is pretty amazing!

However, we have seen a huge demand for clients who wish to migrate from VPS or dedicated servers, over to our reseller hosting plans which previously, would require a ton of manual work.

Now, it's possible to migrate from any VPS or Dedicated Server running cPanel, to our Reseller Hosting platform with just a few clicks!

Migration to our VPS Servers 😎 new

We have taken that a step further, by now allowing clients the ability to migrate from any cPanel account, reseller account or even an external VPS over to their VPS servers hosted on our network!

Better yet, this allows you to migrate from 'managed' VPS providers, who don't grant full 'root' access, straight over to your own VPS here with us! 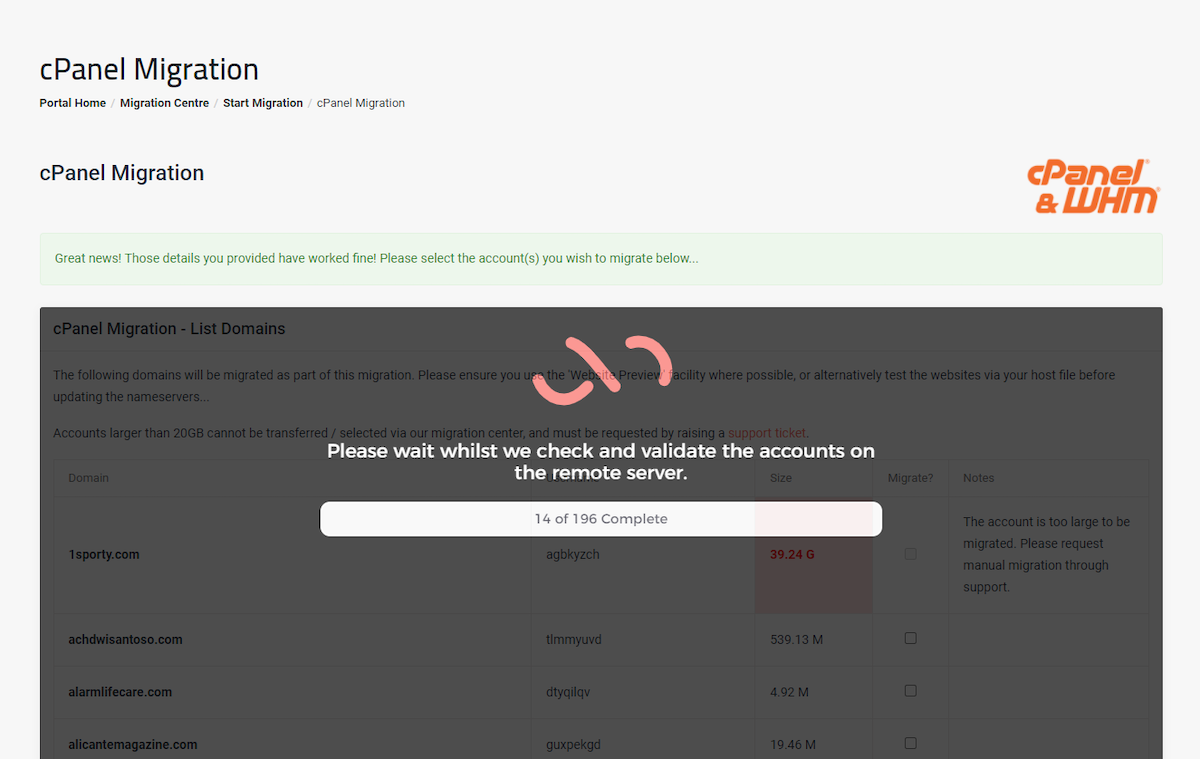 Once a username and password have been entered within the Migration Center, we then go through a fairly extensive process to validate the accounts to ensure its safe to move them over. Those checks involve a number of complex calls and queries which can take some time to complete.

As such, we have revised this screen by providing clarification that the process is underway, with an animated loader and a progress bar.

Faster Migrations (and we mean MUCH faster) 💣 improvement

Previously, our Migration Center would create a full backup of the remote account, download that backup, and perform a full restore. This, whilst not slow, can for some larger accounts be a little tedious!

Now, we have improved this process drastically, by introducing the ability for the migration to take place in most part, through the use of rsync threads.

Not only that, but our Migration Center queue has been improved, with faster processing times on queued tasks (around 3.5x faster!) and drastically improved visibility on the migration process.

For those migrating larger reseller accounts from remote servers, this process has improved dramatically. Previously, we would migrate all accounts, then update the 'ownership' of all accounts in 'bulk' shortly after. Instead, we now migrate each account, then update its ownership just a minute or so later, making the account appear in your reseller account much faster than before!

When initiating a migration from a large reseller account, we would before queue all of the accounts into a single migration thread, with a single transfer session ID.

Now, when you select multiple accounts for migration, they will be queued as individual tasks within the Migration Center.

This means the following improvements...

We hope you agree, these are some amazing improvements for those of you who use the Migration Center day in, day out to streamline your client acquisition process!

We are incredibly proud to confirm, that so far our Migration Center has been used to migrate over 45,000 domains, without any data loss!

It's top-secret 😈 , but DirectAdmin resellers, be warned! We are going to make your lives much easier over the coming months!

In addition to this, we are a number of gigantic steps closer to our longer-term plans, which is to eliminate manual work involved in the migration process entirely. Big goals!

Over and out for now!

We have now added 3 new huge-specification machines to our fleet!

Of course, given the recent announcement regarding the UK Cloud upgrades, the new server in the UK is temporary and will be replaced with the new cloud solution being deployed within the next 4-6 weeks.

If you are a reseller, looking to sell in additional locations to your customers, the new locations are already live and can be added through your Elite module!

I am super excited to announce, that we are releasing some incredible upgrades to our UK hosting infrastructure which will be taking place within the next few months!

We have invested almost £200,000 in new infrastructure, which introduces an overwhelming number of benefits to our platform.

Because of the overwhelming number of changes, we have built a new page specifically to outline the changes being made...

We have now published our pricing revisions following the recent cost increases from WHMCS. These changes are now live, and will be applicable with immediate effect.

Please note, that the WHMCS 'Starter' licence is no longer available via WHMCS directly (the lowest licence they provide is the 'Plus' licence at $18.95).

We have continued to offer the 'Starter' tier exclusively to our clients, with no price increases applicable. 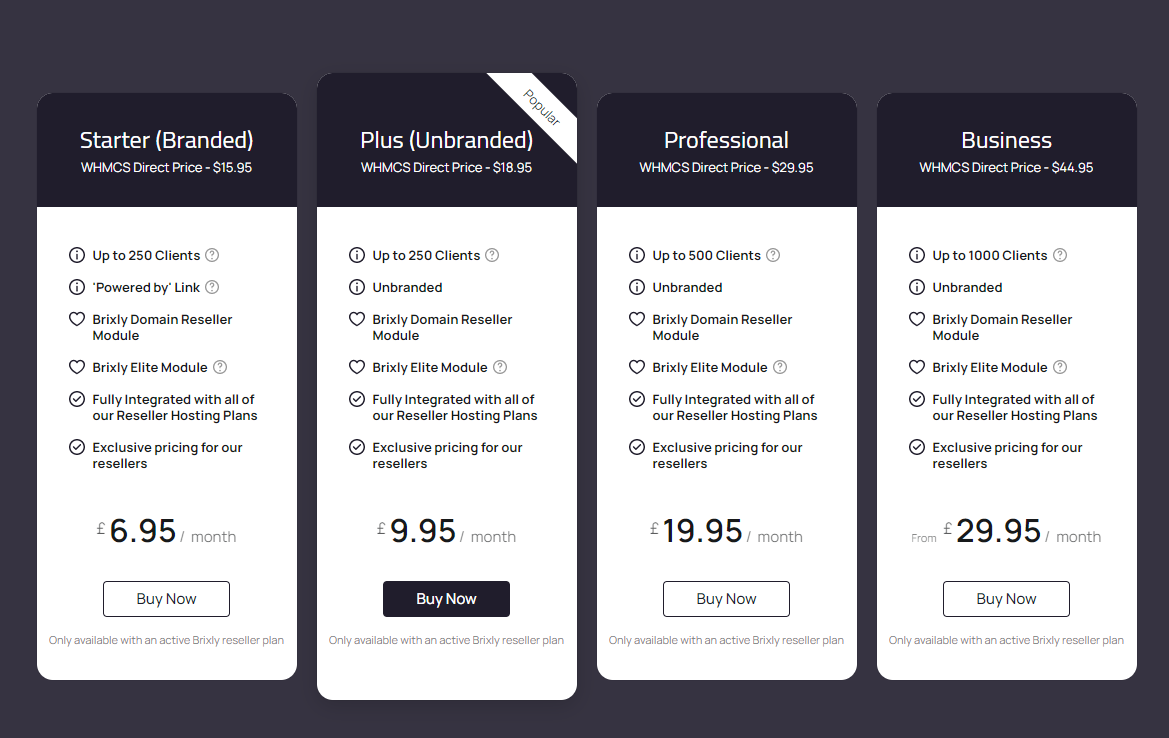 We are incredibly excited to announce the long-awaited release of our Central Account Manager!

The Central Account Manager is a fantastic new tool, developed in-house to provide an overview and insight into your list of accounts as a reseller!

With full search capabilities and summarised statistics of your sub-accounts, our new functionality has been designed to make managing multiple resellers accounts simple and easy!

If there is any additional functionality that you would love to see as part of our Central Account Manager, you can request this by providing a feature request here...

We have added an article to our knowledge base to explain in some more detail, how the Central Account Manager works...

Within the next few weeks, we will also list DirectAdmin accounts within the same interface, providing you with a single pane of glass to list all accounts across your DirectAdmin and cPanel reseller plans!

Historically, our process for logging and managing abuse cases has been to immediately suspend abusive accounts.

We do understand though, that this process can seem somewhat disruptive, and a more formalised procedure was required to handle abuse cases moving forward. This is through the understanding that not all abuse cases are in response to 'intentionally' malicious content or issues.

We are incredibly pleased to announce our latest development, the Abuse Manager - immediately available from our client area.

This feature has been designed to improve communication surrounding abuse cases, which is an ideal addition for resellers with large volumes of accounts.

Please note that the abuse facility for most of you, won't ever be a concern! However, for those cases where we do need to reach out in relation to abuse reports, you will be able to see the abuse cases listed in the new screen below...

Each opened abuse case will have a corresponding support ticket (used to inform you directly of the abuse case), which can be navigated directly from the above screen.

Any communication in relation to the abuse cases can then be discussed via the support ticket, ensuring you are updated via email.

We have made some minor changes to the navigational structure of our client area, to ease access to some of our core tools and features. 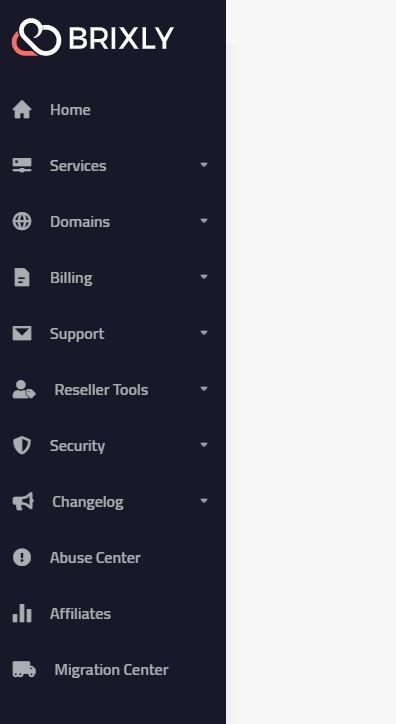 We have grouped some of our items, such as the following...

We have also centralised some tools for our resellers, under the new menu item 'Reseller Tools'.

We have also combined our Changelog and Feature Request links to a single menu item.

We are pleased to announce the release of cPanel shared / reseller hosting in Singapore!

This is available immediately through the checkout for Infinity, Infinity+ and all Reseller Pro tiers.

We are very pleased to announce the release of our USA VPS servers which can now be provisioned through the Brixly Elite module!

This has been released due to popular demand via our feedback portal... 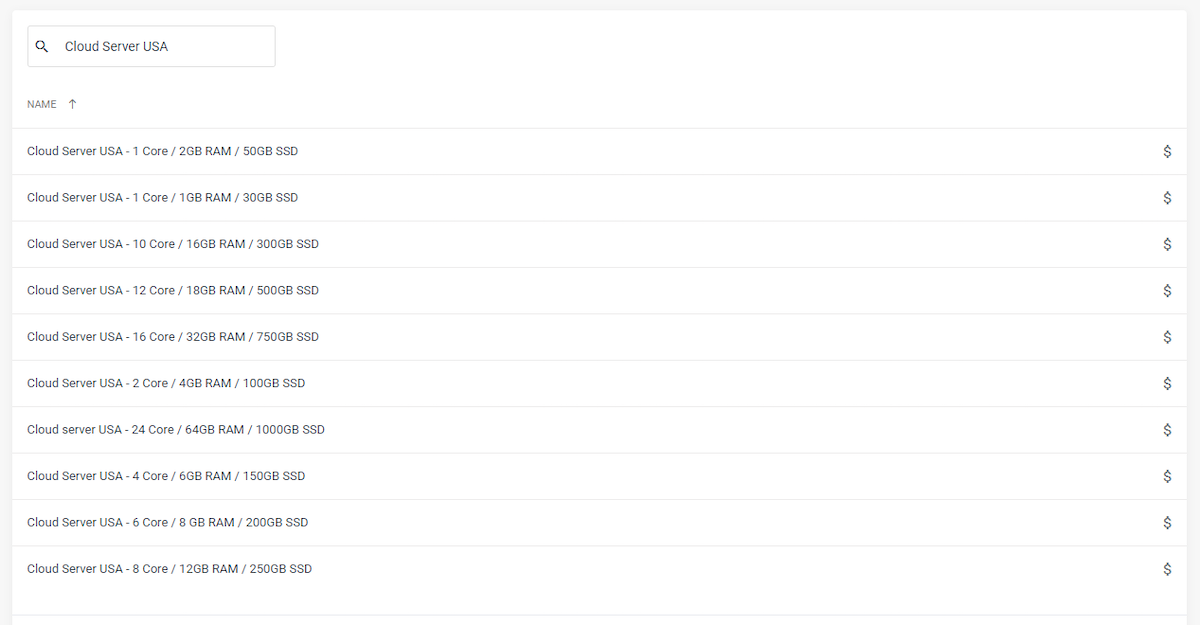 If you are looking to sell VPS servers in the USA, or any of our additional products and services then see the following article for more information...

We have now added a £50 debit facility on our Domain Reseller module, allowing you to automatically register domains under this value automatically, without the need for a credit balance.

This functionality was released as a follow up to the following feature request...

This facility has a spend protection limit of £50 - invoices raised will require payment within 14 days in all cases.

The documentation on this has been updated below...

Create yours, for free!